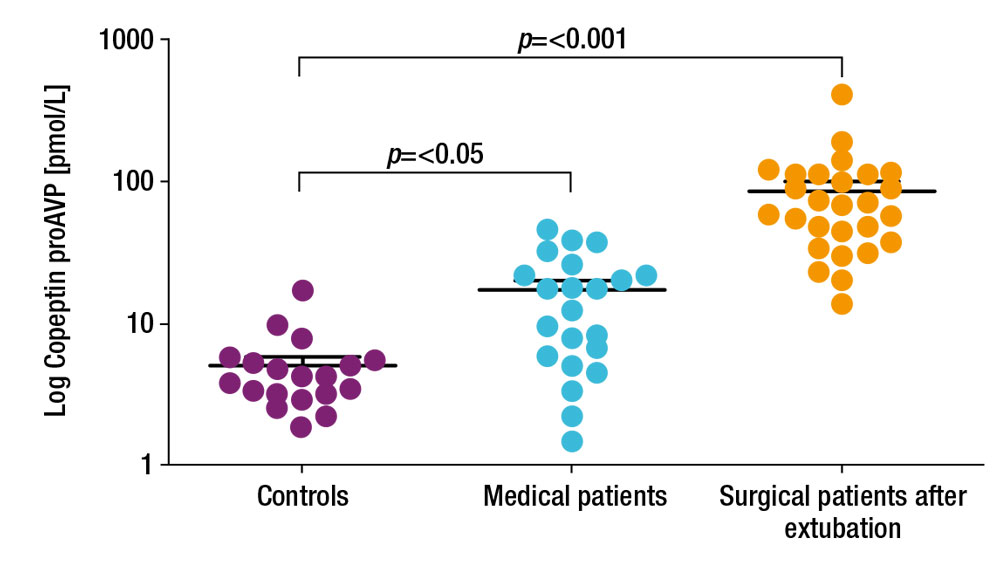 Surgery is a stressful event known to stimulate hypothalamic stress hormone release. Ref-2, Ref-3 Maximal stress is generally experienced after extubation and it has been shown that Copeptin levels multiplied after surgical treatment.  Ref-4

Manipulation of the pituitary gland during neurosurgery may alter its secretory function. 16-34% of patients undergoing pituitary surgery developed a post-operative Diabetes insipidus (DI).Ref-5 DI is therefore the most common cause of prolonged hospital stay. Ref-6

Although the disease is self-limiting and benign in the majority of cases, Diabetes insipidus occasionally develops into severe hypernatremia and hyperosmolality if the deficit of fluids is not immediately replaced. Therefore, a timely and accurate diagnosis followed by an appropriate patient management is crucial. Ref-7, Ref-8

Copeptin forms the C-terminal part of pre-provasopressin. Upon stimulation, vasopressin and Copeptin are released from their storage granules in the pituitary and rapidly enter the bloodstream in equimolar amounts. Ref-9,  Ref-10 Thus, Copeptin can be considered a true surrogate marker of vasopressin.