Sepsis in the ICU: Sepsis Severity and Progression

The incidence of sepsis has continued to escalate rapidly in hospitalized patients Ref-1, with mortality rates of between 10% and 54%, depending on disease severity Ref-2,3. A prompt assessment of the infectious load and disease severity in the early stages of sepsis is therefore crucial in order to provide a rapid diagnostic and therapeutic response Ref-4. Clinical scores such as SOFA, APACHE II and SAPSI II have previously been developed for this purpose Ref-5, however incorporation into daily routine is hampered by their relative complexity.

In a study by Elke et al. (2018), 1089 patients were enrolled up to 24 hours after diagnosis of severe sepsis or septic shock, with a 28 day all-cause mortality rate of 26.9%. MR-proADM was the most accurate parameter of all biomarkers and clinical scores in identifying the risk of 28 day mortality upon initial diagnosis across the total population (Panel A), irrespective of whether patients were classified according to the sepsis-1 or sepsis-3 definitions. Interestingly, both lactate and SOFA performed relatively poorly in the sepsis-3 classified patients (Panel B), whereas MR-proADM maintained its performance in both sepsis-3 (Panel B) and septic shock-3 (Panel C) patient groups. 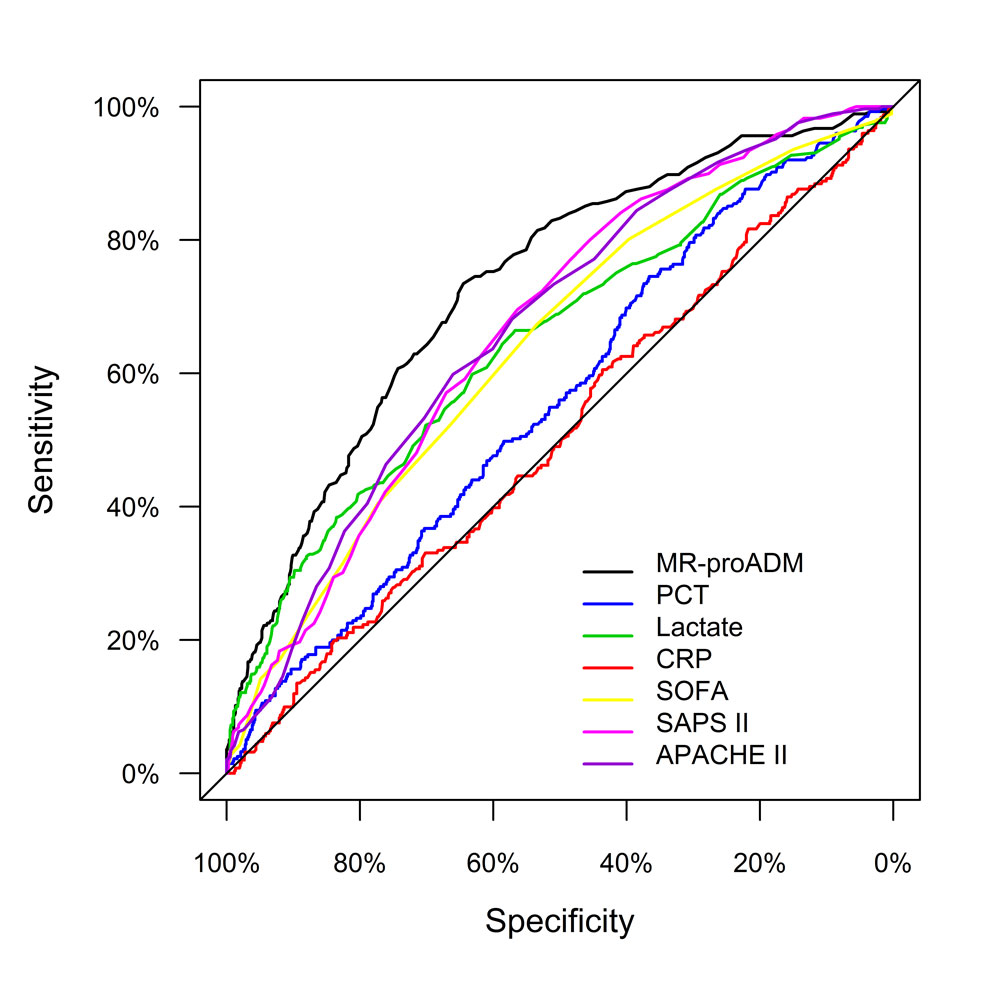 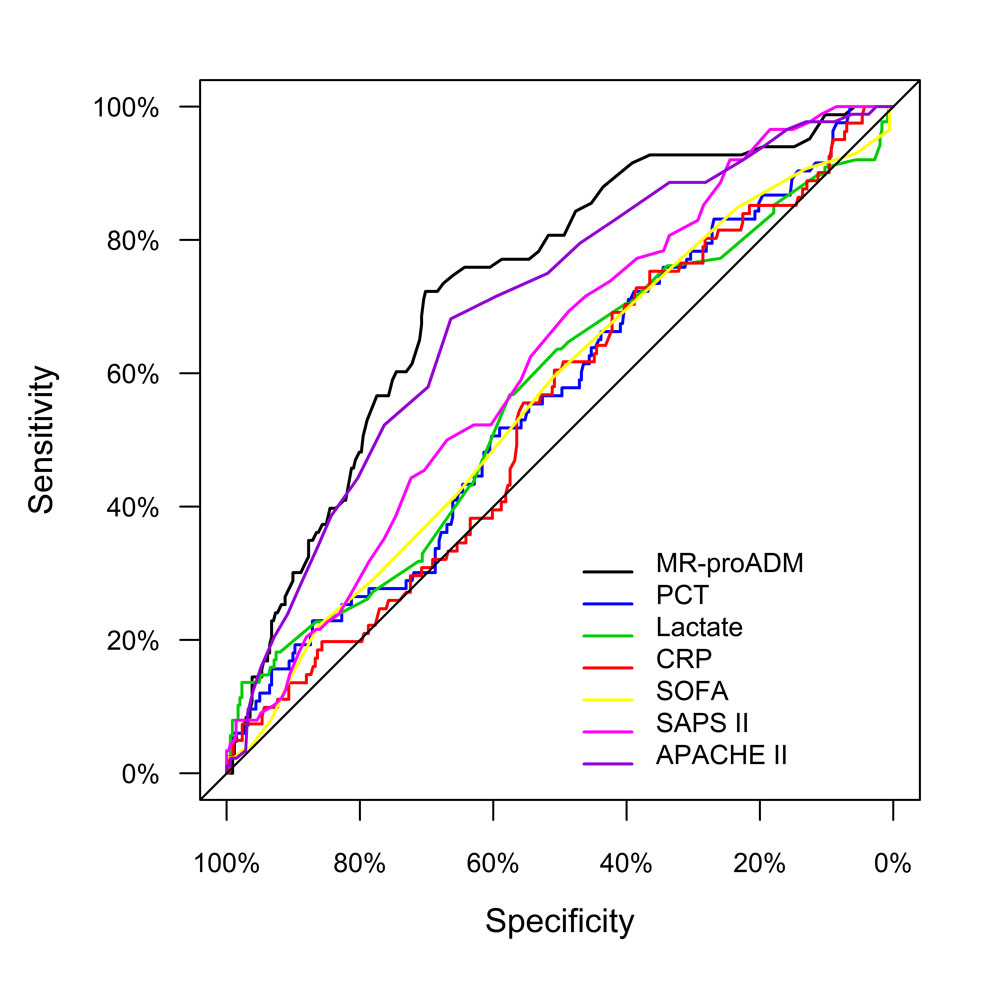 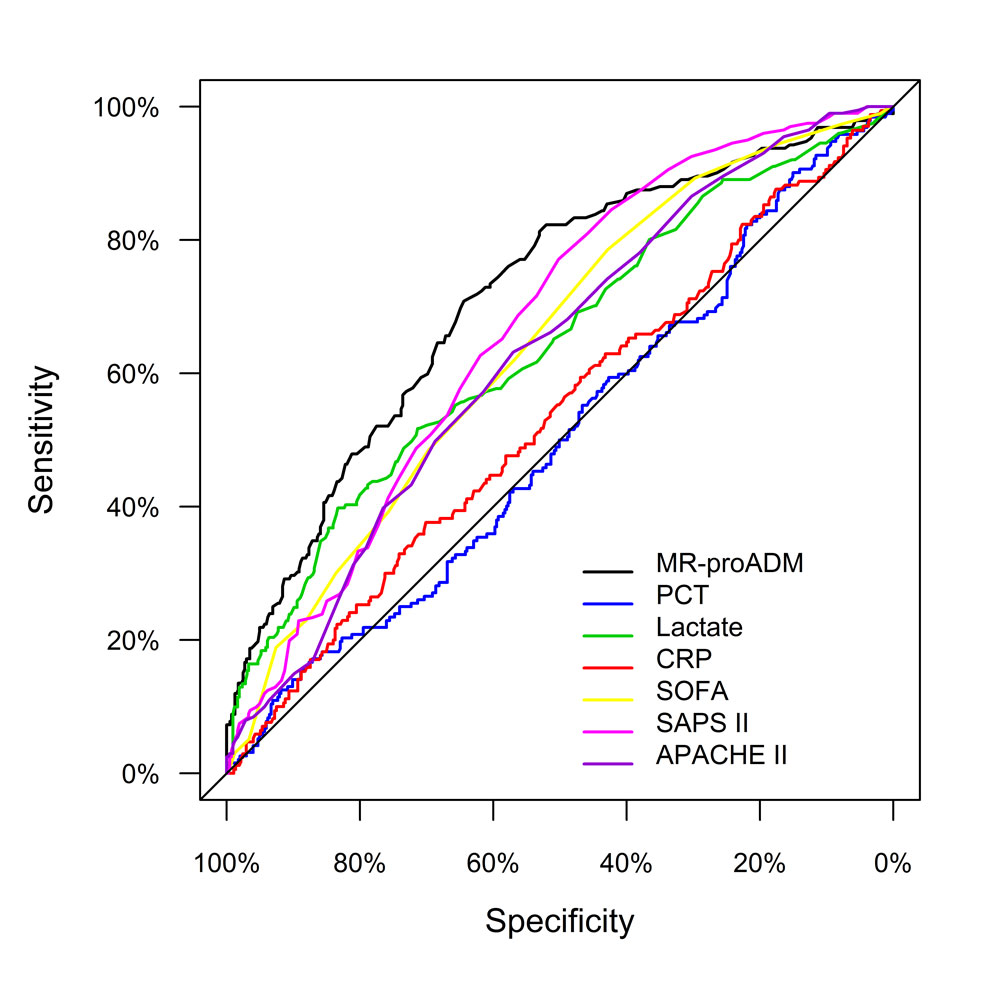 Patients entering the intensive care unit (ICU) have a wide range of different levels of organ dysfunction, with higher mortality rates expected in those with extensive organ dysfunction. A key clinical demand is the identification of likely disease progression in patients with low or intermediate organ dysfunction, who may further deteriorate and progress towards multiple organ failure.

MR-proADM showed the highest accuracy of all parameters in the low (SOFA ≤7; Panel A) and moderate (8≤ SOFA ≤13; Panel B) severity SOFA subgroups, confirming the results of a previous investigation highlighting the superior performance of MR-proADM in low and intermediate organ dysfunction severity patients with severe sepsis or septic shock Ref-6. Indeed, Andaluz-Ojeda et al. also placed significant importance on patients with low levels of organ dysfunction, since “this group represents either the earliest presentation in the clinical course of sepsis and/or the less severe form of the disease” Ref-6.

The incorporation of MR-proADM into an early sepsis management protocol may therefore help guide early diagnostic interventions and facilitate a more intensive treatment in these patient groups before any further organ dysfunction development. 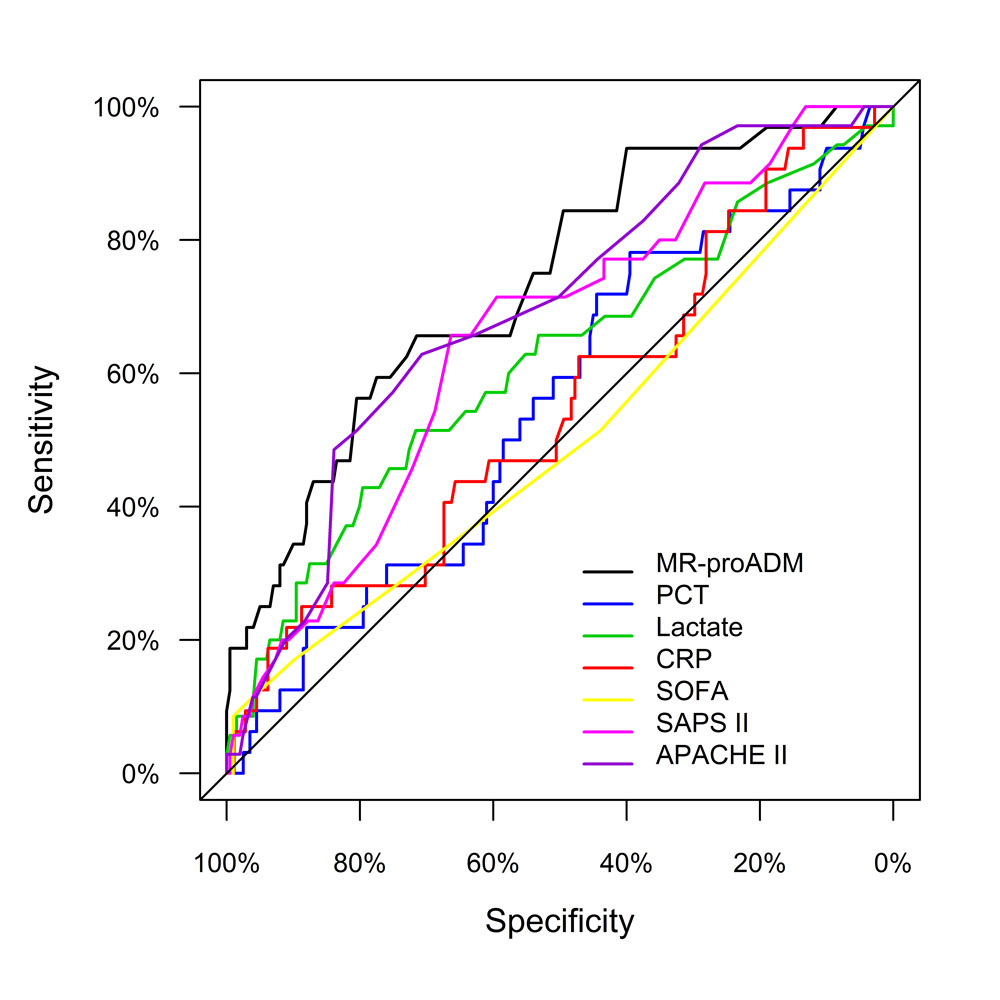 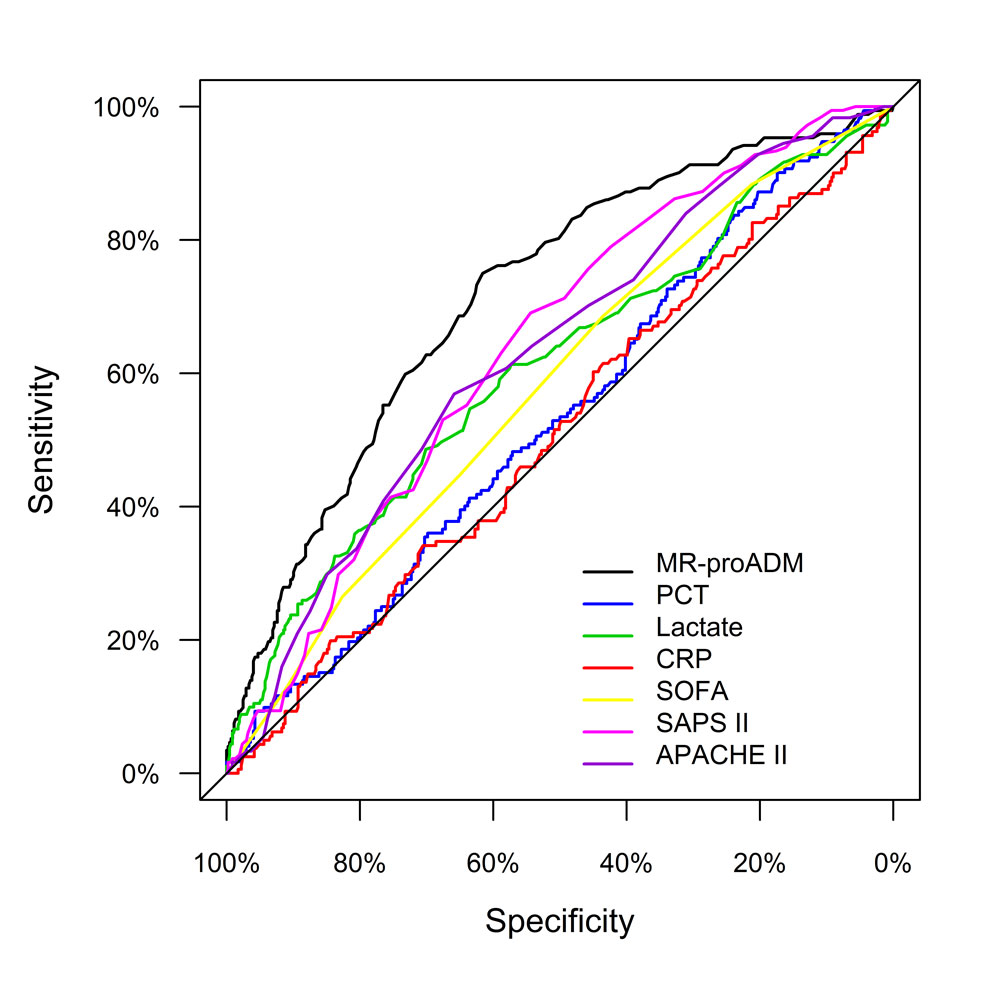 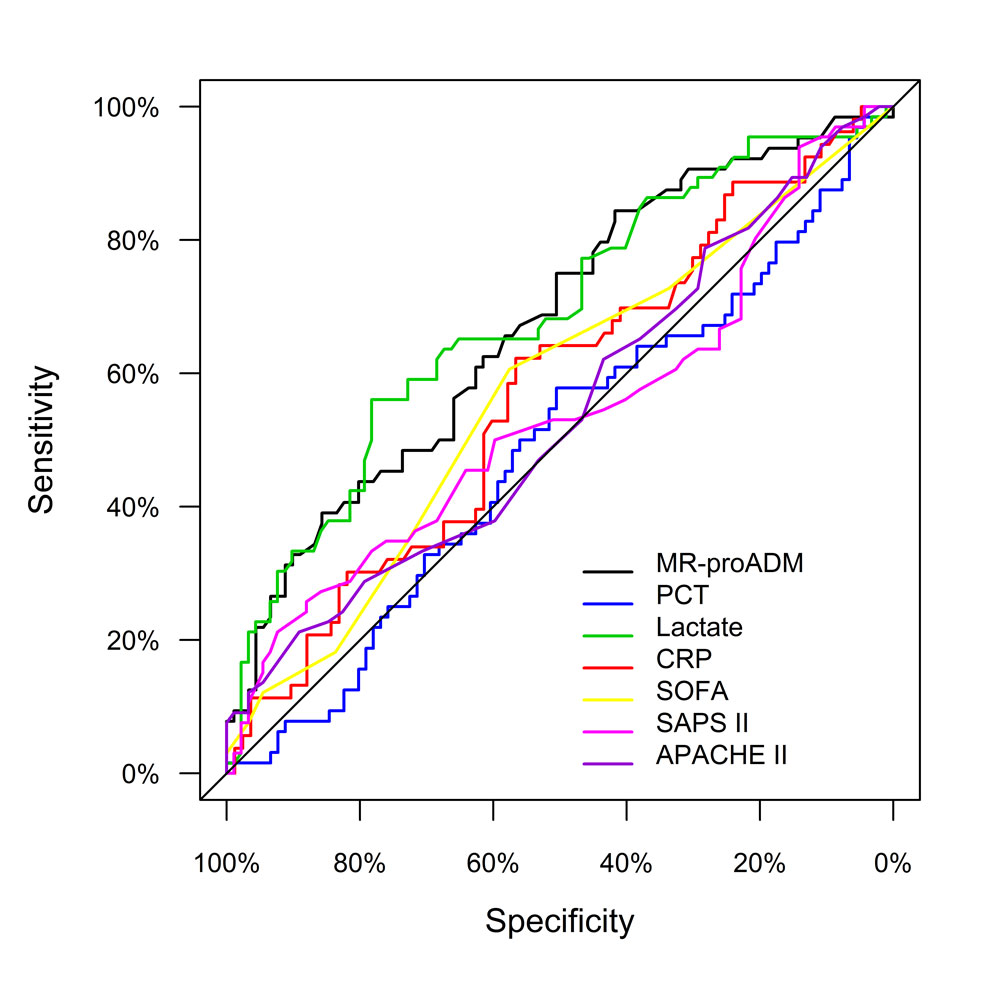